Here's a woman who gets it. She speaks truth to power and she's taller than Bob Corker.

Posted by Whites Creek at 9:01 PM No comments: 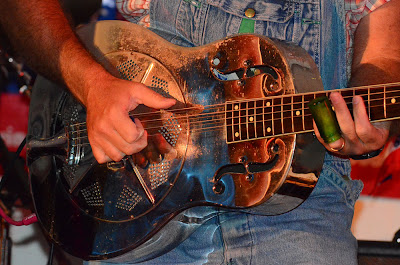 And real danged happy!
Blue Mother Tupelo
Jammin' at Hippie Jack's is a PBS series. It's videoed at "Hippie" Jack Stoddard's farm in someplace north of Monterey, TN on the east bank of the west fork of the Obey river. I first met Hippie several years ago when my brother played with Ab the Flagman for the show. Hippie runs a class Non Profit act and as just was gracious to us hangers on as he was to the musicians themselves. Jack is a renowned photographer and I hesitate to post any of my amateur hack stuff, but if you'll just think of these as "snapshots" instead of high art it may work. As I work things up I'll post more in a slideshow. Check back.

Steve
Posted by Whites Creek at 9:25 PM No comments:

"Let our countrymen know, that the people alone can protect us against these evils, and that the tax which will be paid for this purpose, is not more than the thousandth part of what will be paid to kings, priests and nobles, who will rise up among us if we leave the people in ignorance."

Thomas Jefferson
Posted by Whites Creek at 7:50 AM No comments:

One of the more disgusting campaign tactics used most often by Republicans is attempting to discredit a person's good accomplishments with a half truth or whole lie campaign. Since the 2004 Presidential campaign we now know this as "Swift Boating", the process by which the genuine Viet Nam War hero John Kerry, was reduced, by outrageous but repeated lies, to the level of the genuinely AWOL George W. Bush. Included in this process was the wholly manufactured "Rather Gate", in which the few documents that escaped the physical record cleansing of Bush's National Guard record by Rove operatives were attacked as forgeries on the flimsiest of evidence. And, even though office staff verified the facts of Bush's failure to report for duty contained in the documents, Dan Rather's career was ended for all real purposes, and the age of mainstream American Media as the watchdog  of Democracy was officially over when CBS failed to stand up for their star newsman and he resigned under pressure.

Many of us first noticed the tactic when Karl Rove was dealing with a campaign in which the other guy was dripping with accomplishments, a public activist on many levels, and proven leader. This was a problem when Rove's guy was pretty much a spoiled rich kid recovering alchoholic party boy with Bin Laden family associations, business failures, and a fair record of non accomplishment. Rove's method can be boiled down to "Smear the truth, Repeat, repeat, repeat the lie." So it was with Al Gore and George W. Bush in the 2000 Presidential campaign.

Among Al Gore's many accomplishments was the fact that he recognized the potential of a World Wide Web early on.  At every opportunity, Gore pushed for ways to bring his shared vision of the information super highway into reality. From an article by Mountain Democrat columnist David Jacobson, in which he notes the claim that Gore said he "invented" the Internet is an outright lie.


But the real question is what, if anything, did Gore actually do to create the modern Internet? According to Vincent Cerf, a senior vice president with MCI Worldcom who's been called the Father of the Internet, "The Internet would not be where it is in the United States without the strong support given to it and related research areas by the Vice President in his current role and in his earlier role as Senator."

The inventor of the Mosaic Browser, Marc Andreesen, credits Gore with making his work possible. He received a federal grant through Gore's High Performance Computing Act. The University of Pennsylvania's Dave Ferber says that without Gore the Internet "would not be where it is today."

Joseph E. Traub, a computer science professor at Columbia University, claims that Gore "was perhaps the first political leader to grasp the importance of networking the country. Could we perhaps see an end to cheap shots from politicians and pundits about inventing the Internet?"


So Gore had done exactly what he claimed,  "During my service in the United States Congress, I took the initiative in creating the Internet."

But ask a Republican about this and nine times out of ten they will joke about Gore claiming he invented the Internet. (I'm being generous here because I have yet to run across a Republican who gives Al Gore his due.)

This brings us around to the Internet hall of Fame, which I predict will soon be disparaged and denigrated by  Conservative pundits because Al Gore has been named one of the inductees.


Al Gore, the 45th Vice President of the United States, was a key proponent of sponsoring legislation that funded the expansion of and greater public access to the Internet. Instrumental in helping to create the “Information Superhighway,” Gore was one of the first government officials to recognize that the Internet’s impact could reach beyond academia to fuel educational and economic growth as well.


In this media age which saw 68% of American believing Saddam Hussein was in part responsible for 9-11 and not one single news person asked George W. Bush about his business association with Osama Bin Laden's brother, Salem, I wonder if we'll see Al get his due?

I'm not expecting it to happen.

Steve
Posted by Whites Creek at 8:27 AM 2 comments:

What happened under Bush? We cut taxes on the rich and doubled military spending. (And started wars.) And don't forget collapsing the economy, forcing people onto unemployment and food stamps. That is why we have a deficit. We have a deficit because of tax cuts for the rich, huge military budget increases and the consequences of deregulating corporations.

It amazes me that anyone tries to blame the economy and deficits on Obama...Even more so that any sentient human being falls for that.  Read!

The Deficit Clowns Come to Washington
Posted by Whites Creek at 7:38 AM 2 comments:

"Mother's Day" was the idea of Julia Ward Howe, composer of the Battle Hymn if the Republic. After seing her work used as the anthem for men to slaughter each other in the American Civil War, she called for the mothers of the world to withhold sex for the wagers of war, and for women to take over the world to foment peace:

"We will not have great questions decided by irrelevant agencies. Our husbands shall not come to us, reeking with carnage, for caresses and applause. Our sons shall not be taken from us to unlearn all that we have taught them of charity, mercy and patience..."

In the name of womanhood and of humanity, I earnestly ask that a general congress of women without limit of nationality may be appointed and held at some place deemed most convenient and at the earliest period consistent with its objects, to promote the alliance of the different nationalities, the amicable settlement of international questions, the great and general interests of peace.