So Do FundXtians Really Want to Hack Off 4 Billion People?

My local paper published a letter that made me sad and got me to wondering about the frailty of our society. The writer was "outraged" that another writer had used the "tired old demonization card" on folks who were sensibly demonizing Islam? The entire letter is such a jumble of illogic that it turns my brain to mush if I think about it too hard. How dare we accuse the writer of Islamophobia when "the growing anger and prejudice is actually reasonable", have we never heard of "the Trojan Horse?"...And there is a school somewhere in Virginia promoting Sharia and "Saudi backed saboteurs in the Muslim Brotherhood operate in America" and promise to eliminate and destroy Western civilization. And, and, the promoter of the "so called Ground Zero Mosque" has connections to Hamas and aren't you really scared now?

Well, no. First off, the "Ground Zero Mosque" is neither a mosque nor is it at Ground Zero. It is a cultural center with gyms and swimming pools and meeting rooms and all the things that one would find at any other large faith based facility. It does have connections with a mosque that already exists two blocks from the World Trade Center site. It's headed by Imam Feisal Abdul Rauf, whose life has been dedicated to multiculturalism and interfaith co-operation. His contacts with Hamas were actually conducted at the behest of the Bush Administration for which Rauf served as an emissary attempting to defuse the hostilities in the Middle East. Since the letter writer couldn't even get Rauf's name correct, it is to be expected that she would be ignorant of the man her letter disparaged, and whose mosque has stood at its current site since before the World Trade Towers were even constructed. Here are some of the things other more knowlegable people say about Imam Feisal Abdul Rauf...

Rauf "has participated at the Aspen Institute in Muslim-Christian-Jewish working groups looking at ways to promote greater religious tolerance. He has consistently denounced radical Islam and terrorism, and promoted a moderate and tolerant Islam." ...Walter Isaacson, head of The Aspen Institute

Imam Feisal Abdul Rauf ... is a bridge figure because he has deep roots in both worlds. He was educated in Egypt, England, Malaysia and the United States, and his mosque in New York City is only a few blocks away from the World Trade Center. After September 11, people often asked me, "Where are the moderate Muslims? why are they not speaking out?" In Imam Rauf, we have a Muslim who can speak to Western people in a way they can understand." ...British author Karen Armstrong

Rauf speaks of "the need for Muslims to live peacefully with all other religions", for emphasizing the commonalities among all faiths, for advocating equal rights for women and opposing laws that in any way punish non-Muslims. ...Fareed Zakaria of CNN and Time Magazine

The letter attributes the atrocities of certain radical Sunni Muslims to what is in effect a completely different religion, Sufism. This is simply ignorant and seems to me to violate the Old Testament Commandment against bearing false witness. (I suspect that the writer is also ignorant of the fact that the Old Testament is found in the Christian Bible, the Quran, and the Torah. Bearing false witness is a sin in Islam, Judaism, and supposedly Christianity. Too bad there isn't a commandment that says, "Thy shalt not let others bear false witness to you and delude you into paranoid fantasies." That would put an end to this Tea Party cult thing, if any Christians still paid attention to the commandments instead of waving them around on plastic signs.)

The same people who foam at the mouth with the effervescence of their "paranoid fantasies" about all Muslims are the same ones who tout conservative Christian values. I would contend that "conservative" and "Christian" are mutually exclusive, given that Christ called upon us to "embrace our enemies", "love our enemies", "turn the other cheek", but no, we have to lump an entire religion into one monolithic scary monster fantasy and be afraid. By doing this we validate Muslims doing the same thing to us. Are Lutherans, Presbyterians, and Quakers the same as the Serbian "Christians" whose religion justified the atrocities of rape, murder, and the genocide known as ethnic cleansing? Is the writer of that letter the same kind of Christian that Adolf Hitler was, after all, Hitler's speeches often declared himself a Christian doing God's work in eradicating the Jews?

Of course not. This entire fiasco is totally manufactured nonsense intended as another wedge issue in the coming election. It is simply more of the same kind of manufactured nonsense created by think tanks funded by Charles and David Koch, billionaire heirs to the Koch empire who also funded $100 million in anti global warming propaganda to help keep their vast oil and energy holdings raking in profits even while destroying their own planet. In dissecting the campaign against a good and well intentioned Sufi Imam, we can see how evil these people are and what they are doing to turn friend against friend and neighbor against neighbor simply to feed their own avariciousness.

May their god forgive them, because I won't.


The New Yorker Piece on the Kochs
Posted by Whites Creek at 10:04 AM 1 comment:

Rude, Crude, and socially unacceptable...Our comedians are our prophets now.

Posted by Whites Creek at 7:59 AM No comments:

The Dove World Outreach Center (Double Speak name for a hate church?) in Gainesville, Florida announced that it would hold a public ceremony at which it would "outreach" to Muslims by burning Korans. The Gainesville Fire Department has denied the Doves a burn permit because they have specific regulations against the burning of books.

Imagine, if you will, the outrage of the Doves if someone announced that they would hold a public ceremony at which they would burn the Old Testament? Well guess what...

The Old Testament is the history of the Hebrew People and Arabs, and it is the point of commonality where Christianity, Judaism, and Islam intersect. The Koran, and the Hebrew scriptures also use the Old-Testament of the Christian bible.

So wouldn't it be blasphemy for someone who calls themselves a Christian to burn the Old Testament?

Pulitzer Prize winning cartoonist Clay Bennett of the Chattanooga Times Free Press
Posted by Whites Creek at 9:24 AM No comments:

Posted by Whites Creek at 8:02 PM No comments:

"I believe that net neutrality is the First Amendment issue of our time," declared Democratic Senator Al Franken at Thursday's public hearing on the Internet, held in his home state of Minnesota.

"Unless it's freedom of religion," he added, "which, until last week, I thought we had kind of worked out."
Posted by Whites Creek at 6:52 PM No comments:

The names of Muslims who were killed by the Al Queda extremists in the attacks of 9-11:


The idiocy of the current debate made me wonder if there were any Christian churches built in Oklahoma City since the Christian Extremist attacks on 5-19-95, which blew up a day care center and killed 19 children under the age of 6. A total of 168 people were killed and over 600 wounded. I was shocked! Shocked to find out that there no fewer than four...FOUR!...Christian churches within sight of this hallowed ground, and two that are actually adjacent to it and that were built since the day those 19 children died at the hands of Christian extremists. Is there no justice in this country
Posted by Whites Creek at 8:47 AM No comments:

The Last US Combat Troops Are Leaving Iraq

AS the last combat troops leave Iraq, let us not fool ourselves. The last American casualty is yet to come. To paraphrase John Kerry, let us ask forgiveness for allowing this stupid war and hope, by all that is just and good in the world,  that I'm wrong.
Posted by Whites Creek at 7:02 PM No comments:

The Real Reason Conservatives Are Against the Islamic Cultural Center


It is not so much that by allowing the cultural center to be built would desecrate ground zero, no far from it. The cultural center would actually stand as a testament to our nation's commitment to religious freedom and upholding the Constitution, so I'm sure the right wing's right wing is not coming out against the constitution of the United States...well except for that 14th Amendment thing guaranteeing everyone equal protection. Everybody knows that was a mistake. It should only protect Republicans, I guess, and the people with the guns at Danziger Bridge.
No, the real reason Conservative wingers are opposed to the Islamic cultural center is that it would desecrate the other establishments that stand in the ex-shadow of the massive financial district monument to capitalism run rampant. We must uphold and honor the capitalists and those who died serving them... As I continue with this honorarium, I ask that everyone bow their heads and remember that we must serve the richest of Americans, the top 1 % who have prospered mightily since they caused the collapse of America's economy and brought us what may become the greatest recession on our nation's history in retrospect. Rich America, as represented by the massive financial system monument it wants us to build and pay for at the 9-11 Ground Zero site, has seen its fortunes rise by nearly 20% over the period of the recession, mainly due to the somewhere between 1 and 3 Trillion Dollars of American tax dollars we have given them. (God forbid that the Free Market be allowed to function upon those who loudly champion the Free Market at every turn)
But I digress...
So...Not only would an Islamic cultural center, that could not be seen from ground zero but they'll know it's there, desecrate the memory of folks who lost their lives representing the ideals of America... tolerance, religious freedom, freedom of speech, and the almighty dollar...but such an entity as a cultural center dedicated to reaching out to others in peace, would also desecrate the other entities that are already there, such as McDonald's, Subway, Off Track Betting, Dunkin Donuts, Ho Yip's Fast Chinese Food, Olga's Spa, and the New York Doll's Strip club. 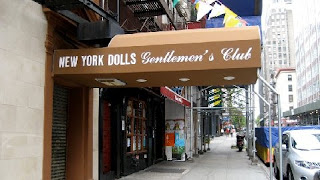 Hallowed ground for sure! And that's just on Church Street.
Church Street? How dare they want to build a church near "Church" street. That is clearly the biggest outrage of all. Well, no... I think the real reason is that conservatives might be afraid that the Muslims will force the strippers to wear burkas and ruin their conservative fun.
One last thing...At the risk of people misunderstanding my saying this, let us not forget that the reason given for the 9-11 attacks was as a strike back at the financial interests in America that were financing the oppressive ruling class in Saudi Arabia. Let's call it the "Second Stone" if you will. Since there was a mosque at the site even before the World Trade Towers were built, a truly honest question would be to ask, "Who threw out the first desecration?"
I don't know because there is plenty of blame to go around. I do know that one of the great lessons Christians should be teaching the world is the one teaching of Jesus that transcends all others...
"Retribution is not the path of righteousness."
Peace,
Steve
PS: And really, all you conservatives out there, I wouldn't worry about the Muslims closing down your strip joint. After all, one of the last things the 9-11 perps did on the night before was to go to a strip joint.
Pictures of the neighborhood
Posted by Whites Creek at 9:26 AM 1 comment: